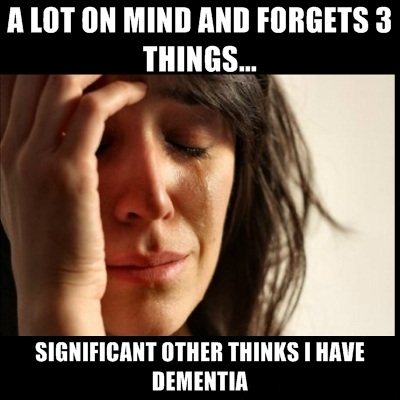 I have serious problem. My wife thinks I have early onset dementia.

Allow me to explain. I forgot a few things this week.

Warning sign #1
A few nights a week, I go to bed after Leandra in order to get work done. So the other night I was tucking her in and she reminded me several times to switch the laundry from the washer to the dryer. Somewhere in-between the short journey from our room to downstairs, I forgot to switch the laundry.

Clearly, it wasn’t because I was thinking of the several projects I needed to finish for my two companies and a client. It must have been something deeper.

Warning sign #2
Today while driving to a local wildlife animal park, I missed the exit. Granted, even though Lee told me to get off at exit 52 mere moments before we got to it, we began talking about something completely different that called for most of my available brain power. Also, we can’t forget the fact that by overshooting the exit we were able to bypass a bunch of construction and arrived before the family meeting us there.

I mean, even though we were having a serious conversation that involved a fair amount of focus as well as saving time in the longrun, missing the exit might be foreshadowing something worse for me.

Warning sign #3
As many of you know, I co-own a tabletop board game publishing company. With that comes many responsibilities. For one, I was supposed to order several prototype copies of the game from The Game Crafter to hand out at GenCon, America’s largest board game convention. This week has been littered with designing a client’s physical food menus and beverage menus and learning the php to render the online menu. I’ve also began development of my web dev company’s website and reviewed Happy Mitten Games’ art and graphic design asset lists. Every day I have more to get done than the time I have allotted for it.

Me forgetting couldn’t possibly have anything to do with being overworked and under a decent amount of stress. Perhaps, I have something that is highly improbable for people in my age bracket.

Seriously. Today I had a legitimate conversation about why I do not have early onset dementia. I had to really argue the reason why this isn’t true. It was the most ridiculous thing I have ever had to argue for. In the history of all arguments. That I, at 31, do not have dementia.

So hold off on calling the nursing home and cancel the doctor appointment. I think I have a pretty good chance of just having a lot on my mind and not having dementia. Thanks Lee for the concern but I’m going to trust my gut on this one.

Not to mention, who forgot to pick up their nephew from work today? Sounds like I might not be the only one…

Location: Downstairs office
Music: The quiet hum of the computer fan
Beverage: None